As the world moves toward implementing fully renewable energy and away from fossil fuels, research is ongoing into the optimization of technologies that will help to achieve a net-zero carbon global economy. Photovoltaic solar panels are a key technology in this green industrial revolution. A paper published in the journal Energies has presented an optimization model for the most efficient solar panel orientation.

The sun has an inexhaustible supply of energy that can be taken advantage of by the world’s power generation sector. Indeed, solar panels are already a ubiquitous part of urban areas across the globe, being installed on domestic dwellings and commercial buildings to provide cheap, limitless power. The solar power industry has shown marked growth over the past couple of decades. 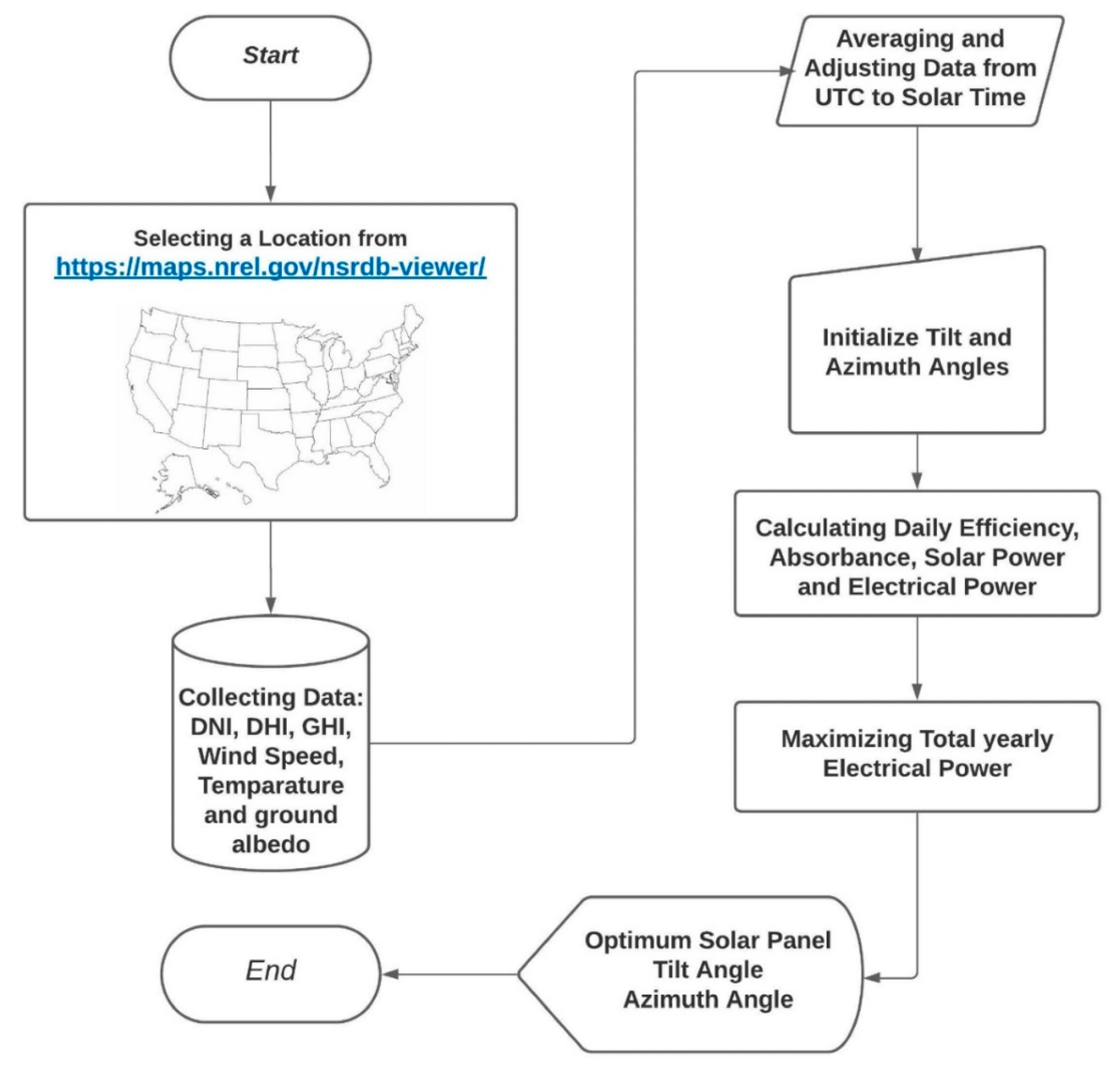 Flowchart of the CDDOP. It explains the steps involved in the three main modules of the CDDOP: data collection and preprocessing, DC power estimation, and maximization of the DC power to find the optimum panel orientation.  Image Credit: Naraghi, M.H & Atefi, E et al., Energies

This growth has mostly been driven by the development of advanced materials used in photovoltaic solar panels. The organic-inorganic perovskite class of materials has proven especially promising for the harvesting of the sun’s boundless energy in next-generation solar power devices. Improvements in storage devices that can release energy during periods such as night-time and days without much sunlight have also driven development in the sector.

Aside from advances in technology and materials, the orientation of a solar panel is vitally important for its optimal performance. A general rule-of-thumb for a south facing solar panel is that it must have a tilt angle the same as its altitude to achieve maximum insolation incidence on the panel. Whilst this rule of thumb works well in practice, other studies have shown that other orientations may be more appropriate, depending on the location, to achieve optimal insolation incidence.

Multiple models have been used to elucidate the optimal orientation of solar panels. In China, the sequential neural-network approximation has been used, which concluded that optimum tilt angle for south-facing solar panels in locations evaluated correlates approximately with the location’s altitude. In Taiwan, the Genetic algorithm and the Simulated-annealing methods have been employed. In Cairo, Egypt, various tilts were investigated, with 20-30o found to be optimal.

Surface and contour plots of DC electric power per square meter generated by PV versus panel angles for Riverdale, New York City, NY, USA. (a) Shows the surface plot of the DC power  kWh/m2 versus the Tilt and Azimuth angle. (b) Shows the contours of the DC power (kWh/m2) versus the orientation of the panel. The stared point in the middle represents the optimum tilt angle of 33.68° and azimuth angle of –5.62° at which 197 kWh/m2 power is delivered by the PV panel. The contour plot shows that small changes in the orientation of the panel result in a negligible DC power decrease. Image Credit: Naraghi, M.H & Atefi, E et al., Energies

A model that provides significant advantages over the traditionally used monthly clearness index model is the hourly clearness index model. This model takes into consideration the variations in solar irradiance relative to the location’s solar noon. Solar patterns in the morning and afternoon are different at the equator and cities in the far north, for example.

A recent trend that has emerged is demand-based solar panel orientation. This trend has received considerable attention in recent years. In some areas, peak demand occurs during the summer months due to the increased use of air conditioning. In New York City, studies have shown that peak demand is during August afternoons.

Average daily DC power generation for Orlando Florida, USA. (a) For an entire year and (b) for summer months (June, July, and August). The three different orientations generate similar power. The horizontal panel provides slightly more power in the afternoon hours. Additionally, the peak power generation is at about 11:00 AM solar time, particularly in the summertime. This is due to more cloud coverage during summer afternoons in Orlando Florida. Image Credit: Naraghi, M.H & Atefi, E et al., Energies

Financial considerations also influence solar panels and their uptake in urban areas. Optimizing the orientation of the panel’s tilt angle can help to reduce annual energy costs. Optimizing the harvesting ability of panels helps to meet peak demand and stabilize the electricity grid, whilst bringing the main benefit of reducing greenhouse gas emissions (which is also a long-term economic benefit.)

The new study in Energies has presented a new model, the Climactic Data-Driven Optimization Platform, which uses historical climatic data from the NREL’s website. Drawing on twenty years’ worth of hourly data, the authors developed a model that has advantages over the traditionally used clearness index method. The hourly data on the NREL website is based on the Direct Normal Incident and the Global Horizon Incident.

The main advantage of the study’s proposed approach is that evaluating the extraterrestrial insolation, clearness index, and geometric factor is unnecessary. By removing this step the model is much simpler, and optimizing solar panel orientation is more efficient. The authors state that desirable objectives such as response to peak demand at various times and maximum annual power delivery by solar cells can be achieved.

The study published in Energies provides improvements over previous models to optimize solar panel tilt-angle and orientation. The authors have stated that their proposed model is flexible, user-friendly, and dependable, and using a data-driven approach lowers the cost of computation and improves the platform’s accuracy. Although the work primarily focuses on US locations, the authors have stated that it can be used in any global location.